About the music: As I first learned how to make this dish on the tropical paradise of the Bahamas, I found it only fitting to set this dish to some bouncing reggae chunes. I also threw some Ween in there because A) the song has banana in the title and B)because that song is just awesome, and basically makes me feel like I am in fact stuck in a cabana, livin’ on bananas… 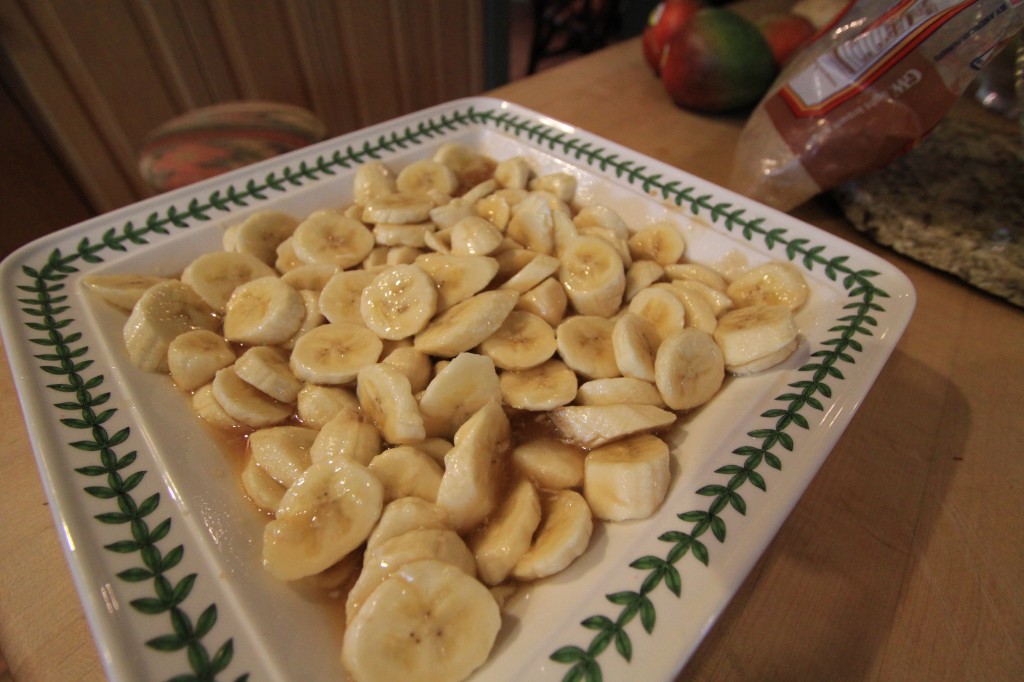 Cut the bananas diagonally into a serving dish so that they are like circles but longer (ovals!) Then squeeze in the lime juice and mix around so all the bananas get covered by the citrus bath that you have imposed upon them. Then add about a half cup of brown sugar (more if you want it sweet, less if you want it so you get that little pucker feeling at the end of your bite). Then, BAM! You have your amazing banana dessert that your friends are all going to ask you how to make.  You could tell them but you’d have to kill them.

Feel free to keep the reggae playing while enjoying the fruits of your labor, get it, fruits?

This recipe is brought to you by our funky fam over at Fancy Funk so make sure and go over to check it out!

About the music: This pesto is red, that doesn’t seem quite right. So, we thought to ourselves, who loves doing things the unconventional way like making a red pesto…hipsters! To appease these fickle readers we decided to go with a nice blend of indie jams that aren’t too over played from artists like “Oh Land & Van She.” Because god forbid we put a song on here with regular radio play on a pop station (at least within the last ten years), there would be rioting in the streets! And no one likes a hipster scorned. 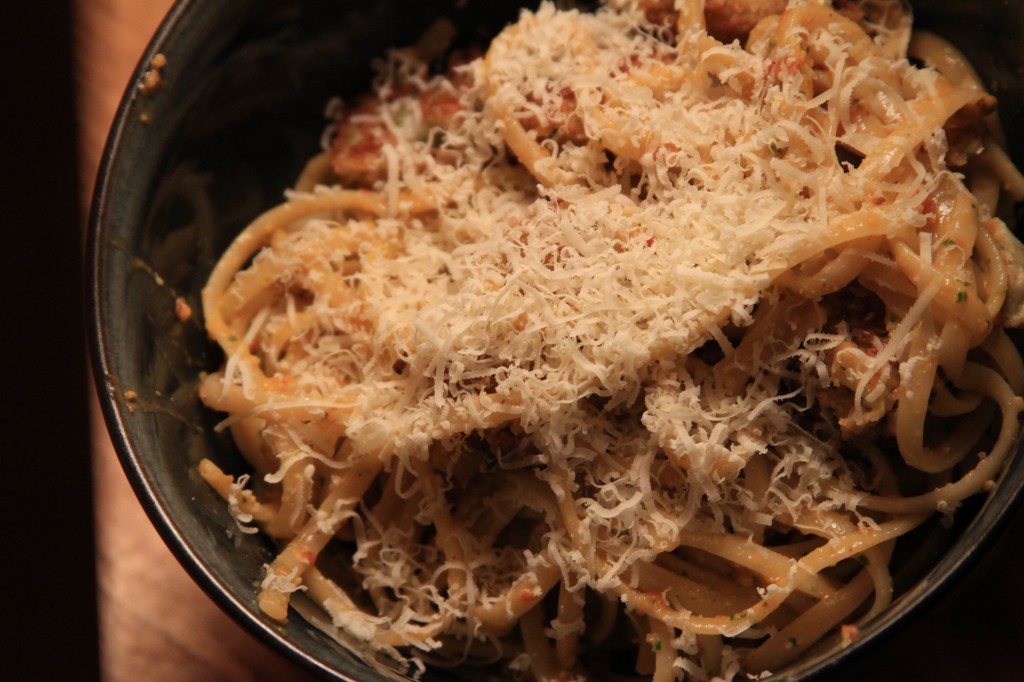 Toast the almonds with a little olive oil in a sauté pan. Remove and let cool, then pulse them in a food processor until finely chopped. Remove and set aside. Add basil, garlic, and salt to the food processor and spin until chopped to your desired choppiness. Then add back the almonds (I used walnuts this time but I think I like almonds better), cheese, 1/2 the parsley, tomatoes and spin ‘er up again. While spinning add your olive oil until you have your desired smoothyness.

For the artichokes, heat the olive oil in a skillet. set out a bowl for the flour, the whisked egg, and breadcrumbs. Dip each heart in the flour, then the egg, then breadcrumbs and fry until you have a crispy golden brown nugget of pure bliss. Repeat as much as your hearts desire and set aside.

Meanwhile, cook the linguine until al dente, reserving about ½ cup of pasta water. Quickly combine pesto with pasta in the pan and cook until heated through, adding water as necessary. Stick the hearts on top and swill this heady dish at your leisure.

We made these delicious fritters the same night along side the tomato almond pesto dish you can also try on the site. We went pretty indie with the music for the pesto dish so we thought it would be fitting to go for a more indie electronic playlist transitioning into a more traditional indie for this heady appetizer.  If you cook it with the pesto the playlists will transition well into each other. 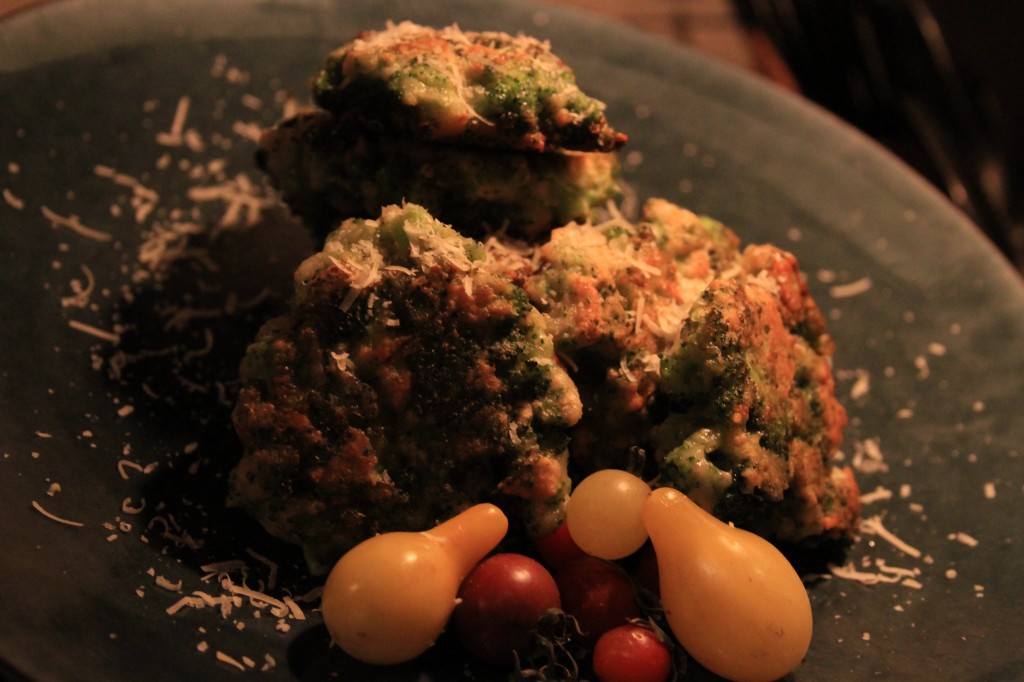 Prepare the broccoli by cutting off the florets as close to the top as possible. You should be left with a bunch of little mini florets. Then, steam the broccoli just until tender, drain and set aside to cool. In a large bowl, beat the egg, then add the salt, pepper, garlic, and cheese and combine. Then add back the broccoli and kind of smoosh it into the batter with the back of a spoon. This is not an exact science, I like to make it so the pieces are small, but still recognizably broccoli. That way, when your eating this cheesy goodness there is still tangible evidence of the healthy part of this dish.

If the batter seems too dry, add a splash of water to moisten it. Meanwhile heat the oil in a skillet to splatter temperature. Spoon off a spoon sized portion of the batter and plop it on the skillet, pressing down a little to form a patty. Cook for a couple minutes a side, or until golden brown.

Serve as is or with a squeeze of lemon juice, or with a tasty yogurt sauce (lemon juice is my favorite).