About the music: It’s Monday and you probably have a job, which we hope you successfully neglected this weekend. Alas, the time has come to buckle down at that nine to five and work, work, work. Here at sfunk we know the cure to a melancholy week is in the details. So trust us when we say this delicious brussel sprout dish doesn’t miss a beat. Brussel sprouts are kinda like roller coasters, you have to be a certain age to enjoy the ride. In an attempt to stay in key with our tune (tasty treats, funky beats), we made this dish so delicious that even rugrats would want a bite. Let it be known, we do suggest that this meal be accompanied with whisky, friends and wiggle room for optional clothing. Just because we can we paired an extra long playlist for this happy hour orderve recipe. On the mix, we’ve got Ms. Sharon Jones, former prison guard turned into funk soul goddess, then our favorite horny hipsters from Brooklyn The Menehan Street Band. Complemented by a sh!tload of groovy tunes from jazz master Grant Green, Aaron Neville, the Meters and other funk soul brothers that’ll bring a smile to your face. Ladys and gents take this week by the brucshetta and may the brussels be with you. 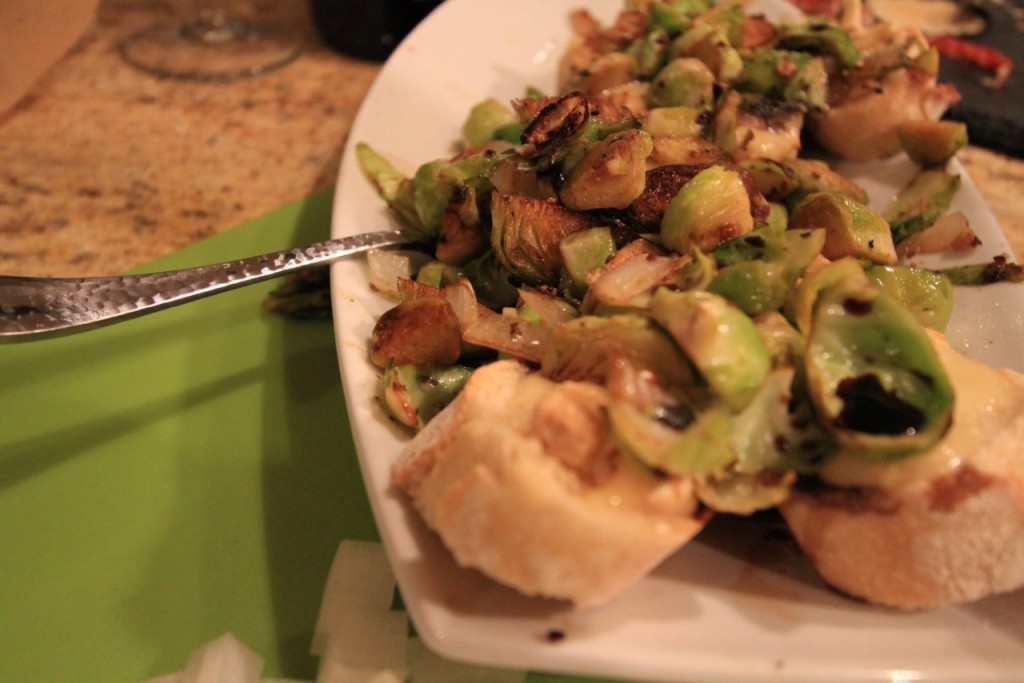 Directions:
Chop up all things that are good; onions, brussels garlic, baguette. Stop and appreciate the smooth horns whispering funky nothings in your eardrums.

Heat some olive oil in a heavy skillet and toss the brussels in, spreading around so that all of them are touching the hot surface. Cook for about 5-7 minutes like that adding salt and pepper to taste. Then add the onion and cook for another 5 minutes. Last, add the garlic and cook for another 1-2 minutes. The brussels should be browning on the sides.

While that is happening slice the baguette and arrange on a baking sheet. Broil the bread until it starts to toast and take out. Spread the brie on each piece of bread and put back in the broiler for about 30 more seconds until the cheese melts. At this point Aaron Neville should be prepping any romantic company you have for the storm ahead.

Top the cheesy bread with the brussel mix and arrange on a swanky looking serving tray. Top it with some salt and pepper and a little balsamic vinegar, and impress your friends with your knowledge of obscure jazz funk.

About the music: This spinach salad recipe goes back six millennia. Legend has it just before Adam used a spinach leaf to cover Eve’s fuzzy peach, they both snacked on a delicious spinach leaf salad. This all happened during those few exotic hours post apple ingestion. Apparently, whilst Adam and Eve were taking a rest from rolling in lust, they got quite hungry and with divine inspiration chefed up the very Songbird’s Spinach Salad we are posting today! At Sfunk headquarters we mused over this delightful tale and came up with eight songs, that will make any kitchen an Eden. Since Eve is blamed as the main conspirator of man’s fall, we thought this mix should be supported by only lady vocals. The opening jam is fittingly titled, ‘The Fall’ by Rhye so prepare yourself for song seduction. Then we’ve got the cheeky New Zealander – Kimbra and her track ‘Settle Down’. Topped off with Brooklyn’s finest duo Sleigh Bells, Joan as Policewoman and other babeses. So please indulge, listen and don’t be afraid to party naked. 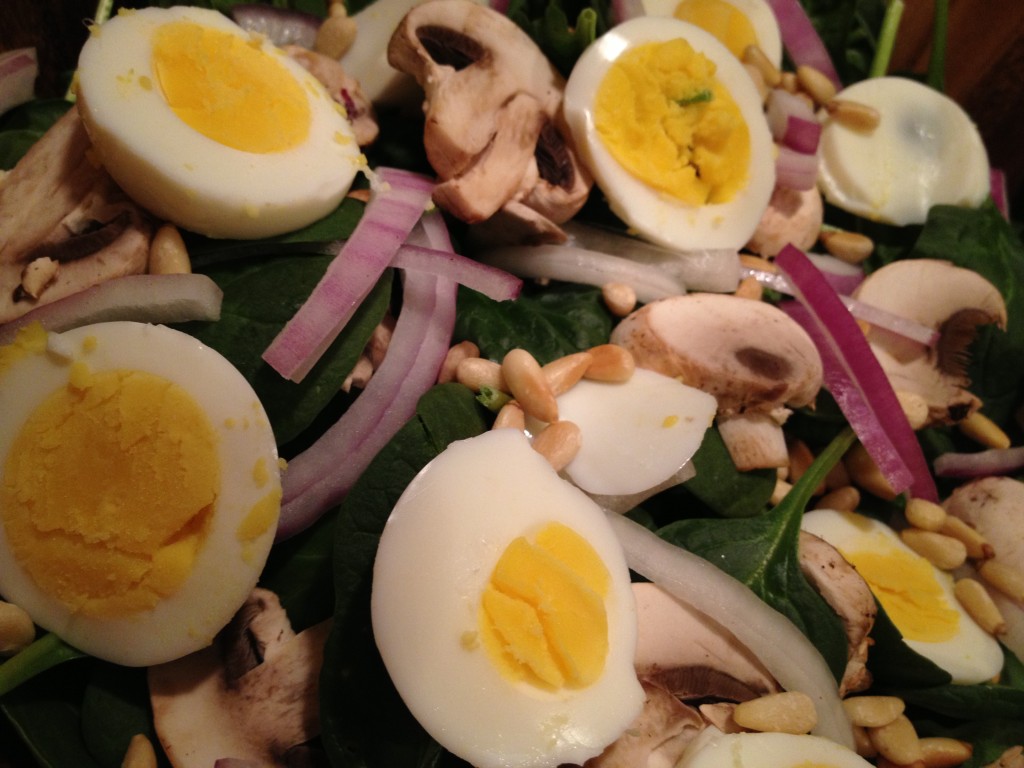 Directions:
First hard boil your eggs. You may think you know how to do this but you don’t. Put your eggs in a saucepan and fill until covering eggs by about an inch. Bring the pot to a boil, let cook for about 30 seconds take off heat and cover for 10 minutes. That’s how a true G hard boils an egg.

Put your dressing in a saucepan with about 1/3 of your mushrooms and 1/4 of your onion. Heat that bad boy up until those things inside it are cooked and infused with vinegary goodness. Heating it also gets rid of some of the alcohol in the dressing and makes it sweeter. Once done put in freezer to cool down until you serve it. As you do this, take a second and think to yourself how cool all this hot new music is making you seem in front of your friends.

Put everything else in a bowl with the spinach, including the now sliced egg. Dress the salad like you would yourself on a perfect 66 degree day. You could be totally cool in a t-shirt but you’re going to rock the hoody just in case you get cold. Translate that metaphor into salad and consume.

About the music: When we were making this dish a few days ago, we realized that we haven’t recorded a special mix for one of our recipes recently. Since the dish came together so well, despite our lack of foresight when it came to making sure we had all the right tools to cook it, we thought we would commemorate it with an hour of the pure goods. It’s hard to put your finger on the genre of this mix to be honest. At Sandwich funk we’ve really been vibing a rework of a song by Ornette, called crazy. It has a smooth yet slightly dark tone to it and we thought it would be a good jumping off point for the mix. We scanned through our music libraries and came away with 16 tracks that we thought would take you for a ride. There are a few of the classics, Ratatat, Todd Terje, Aeroplane & Four Tet, along with some artists we really think you should check out, Ben Gomori, Grovesnor, Bakermat & Cameo Culture. We’re pretty damn excited with how it turned out and we hope you dance to it as much as we did…cuz it was a lot. 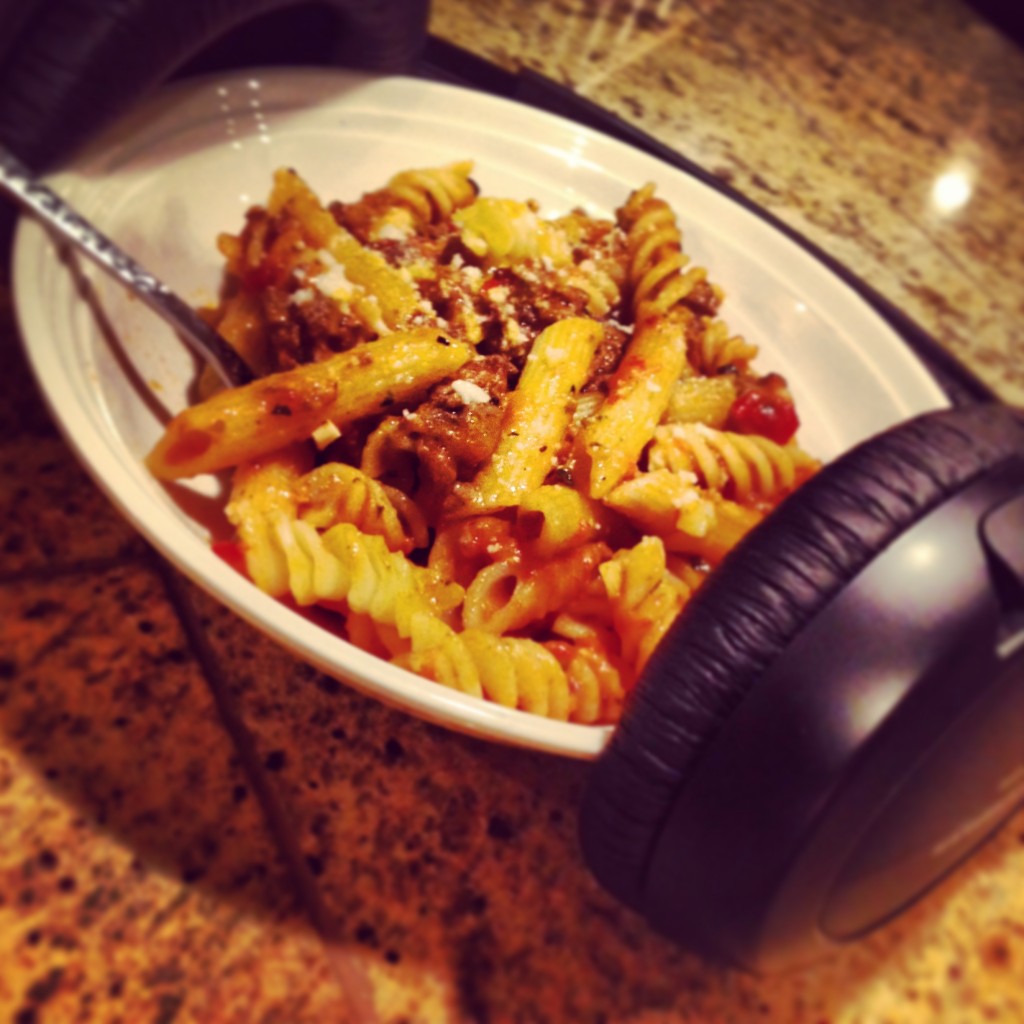 Directions:
First you need to mentally prepare yourself for this mix. It is like an emotional and spiritual journey through baked ziti. You will literally emerge on the other side unable to see baked ziti the same way again. Just know that going into this.
Let’s get this beefy started in here. Preheat the oven to about treefiddy.

The plan is to brown the beef, so turn that burner to eleven (sorta mid/high) and with pan in-hand let the beef simmer, let it simmer with the occasional stir. Once it’s good and brown we need to add the zests and tastes. So flavor it up by adding two cups of tomato sauce, half a cup of half n’ half, two hand fulls(half cup) of grated parm, only one teaspoon of paprika–don’t get too testy now, drop in two teaspoons of crushed garlic and shuffle in a heaping spoonful (two teaspoons) of dried italian seasoning without sneezing.

Try to not be totally overtaken by the moving beats. Take that packet of gravy by the wrapper and if you need to, shake it out, shake it all out. We say – do it. ‘Cause sh!ts about to get real. 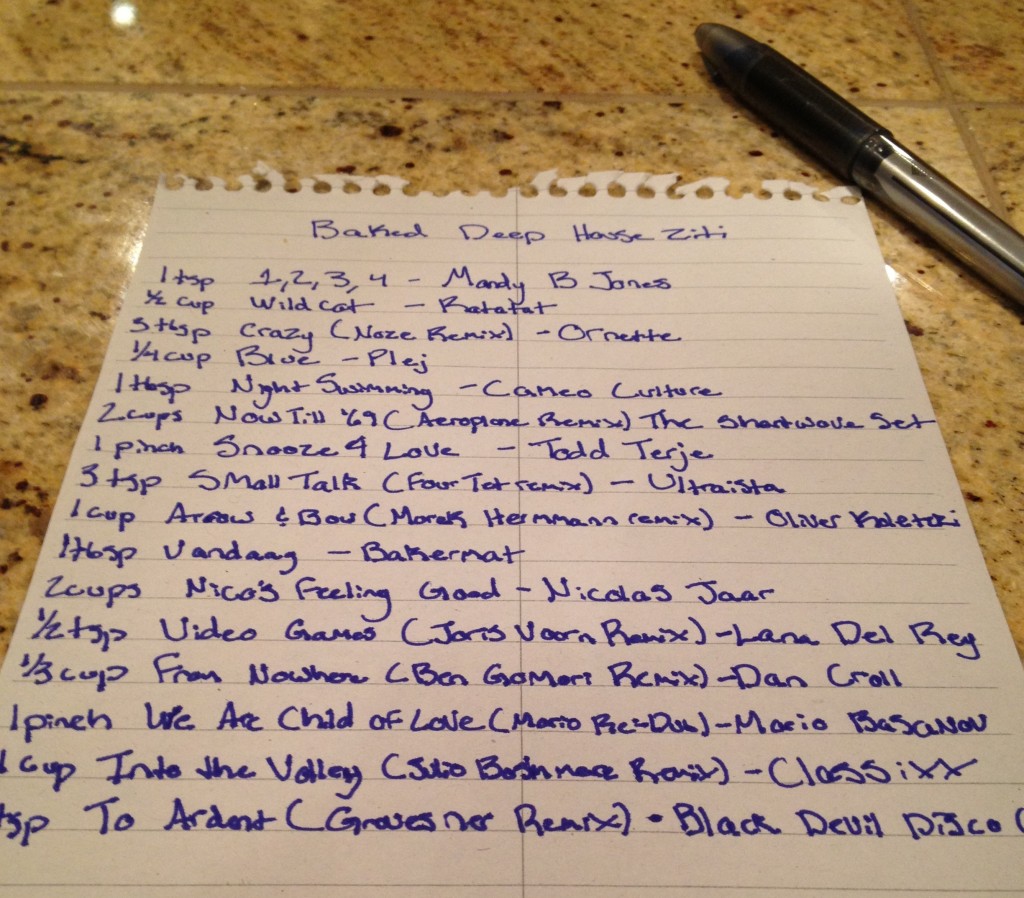 If you contain your dance moves for just one second, pour that packet into one cup of H2O, mix the mix and add it to the meat sauce. Let that mixture of goodness simmer for a hot ten minutes with the occasional stir.

Somewhere around you is a neglected pound of penne pasta. Give it the needed attention by cooking it according to label. **Remember to rinse the pasta with hot water after you drain it — this gets rid of the starch!

Place the mosh-pit of penne’s into a baking dish, most of them will lay down naturally- this is normal. Cover them in the savory beef sauce with the intention to stir the whole thing up.

After the penne and sauce are good and stirred, you need to basically coat everything with shredded cheese. The music should basically be killing it right now. So rock the f out and spread the cheese!!!

Once you’ve gotten a grip on yourself put that beautiful cheesy baking dish in the oven and let it sit for about twenty minutes or till it starts bubblin’. Grab it with oven mitts and let the thing cool off for a bit, it’s going to be hot as the dickens!